Metal Stamping Parts
Stamping (also known as pressing) is the process of placing flat sheet metal in either blank or coil form into a stamping press where a tool and die surface forms the metal into a net shape. Stamping includes a variety of sheet-metal forming manufacturing processes, such as punching using a machine press or stamping press, blanking, embossing, bending, flanging, and coining.[1] This could be a single stage operation where every stroke of the press produces the desired form on the sheet metal part, or could occur through a series of stages. The process is usually carried out on sheet metal, but can also be used on other materials, such as polystyrene.Stamping is usually done on cold metal sheet. See Forging for hot metal forming operations.

The photos of our Stamping Parts 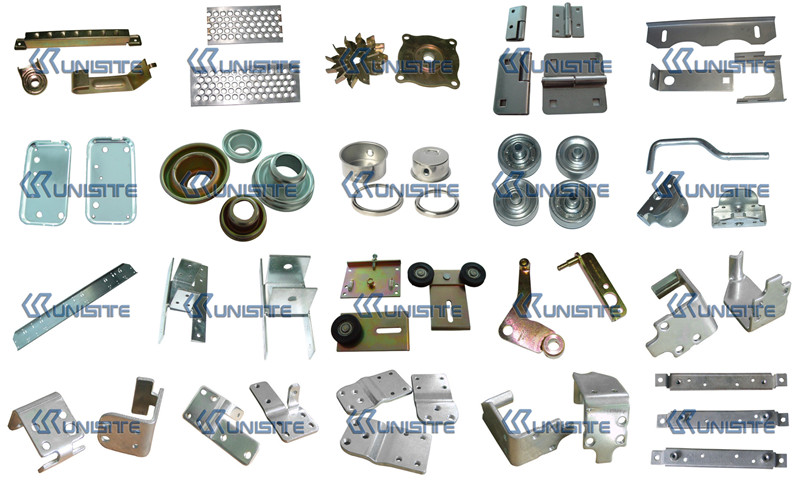 Stamping is by press and die for sheet, strip, pipe and profiles, such as outside force, to produce plastic deformation or separation, to obtain the required shape and size of the workpiece forming method (stamping).Stamping and forging belong to plastic processing (or pressure processing), called the forging press.Stamping of billet is mainly hot rolling and cold rolling steel plate and steel belt.Steel all over the world, there are 60 ~ 70% is plank, most of them after punching into finished products.Car body, chassis, fuel tank, radiator fin, boiler drum, the container shell, motor, electric iron core silicon steel sheet stamping processing.Instruments and meters, household appliances, bicycles, office machinery, household utensils, and other products, also have a large number of stamping parts.
Stamping processing is the use of conventional or special equipment of the power, the deformation of sheet metal in the mould is directly force and deformation, thereby gaining a certain shape, size and performance of the production technology of product parts.Sheet metal, stamping mould and equipment is processing of the three elements.According to the stamping processing temperature is divided into hot stamping and cold stamping.The former is suitable for the deformation resistance is high, poor plastic sheet metal processing;The latter at room temperature, it is commonly used plate stamping method.It is metal and plastic machining (or pressure) is one of the main methods, also belongs to the material molding engineering technology.
Used by stamping mold known as the stamping die, die for short.Die is the material (metal or non-metallic) processing into salt pieces of special tools required.Is of vital importance to the die in stamping, did not conform to the requirements of punching die, stamping production batch is difficult;No advanced punching die, stamping process of advanced cannot achieve.Stamping process and die, stamping equipment and materials to form the three elements of stamping processing, can only draw stamping them together